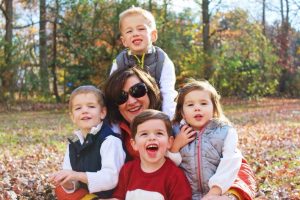 I never thought I would see the day when grandchildren would make my life interesting and exciting.  Many people see grandchildren as the perpetuation of the family line. Some people begin hassling their newly-married children for grandchildren a short time after the wedding.  The parents can hardly wait to become grandparents so that they can babysit and take the children overnight, take them to ball games, to the movies, have parties, take them on trips. Grandparents look forward to not having the children full-time but they do look forward to indulging them and teaching them about family.

I have four grandchildren, three boys and a girl.  I am beginning to find out how much fun they can be, even when they are totally wrecking my house, ripping the toys out of the hall closet and setting up Hot Wheels tracks across the entire living room floor.  The big barn comes out and the cowboys and Indians are battling across the bridges and the curves where the Hot Wheels are careening around corners and dodging Lego airplanes and villages.  I suddenly see several wrappers from fruit snacks, lying on the carpet where the kids have left them after one as gone a reconnaissance mission looking for snacks while my head was turned and returned with the contraband tucked in sweaty little hands.

In the midst of the fun and mess, one of the grands will say, “Nana, can we make cookies?”  How can I say no to that?  So, we pull out the stools, the aprons, the ingredients, and the equipment and get involved in a new mess.  The kids get very excited when they can drop the cookies on the sheets, put them in the oven, and watch them come out after the appropriate amount of baking time.

I was wondering if my kids were as much fun.  I had to think back.  I remember my only daughter was a delight in the kitchen when we baked cookies.  She donned my apron, rolled up several times and tied tightly so that she could walk around the kitchen without tripping.  The stool in front of the mixer allowed her to reach to put the ingredients in the bowl for blending.  On one occasion, I turned to get something when I heard a yelp.  I turned around to see her pig tail had gotten caught up in the beaters and her head was jammed up against the mixer which had whirred to a thumping halt.  That event never prevented her from trying her hand at new recipes and baking projects.  To this day, she is quite a baker.

Another time, my creative son donned a superhero costume, complete with a mask, that he had constucted.  Good for him, I thought.  He’s using his imagination. A short time later I heard some yelling, so I looked out the side door and there on the roof of the shed was my youngster attempting to fly from the top of the shed to the ground.  This is the same child who wanted to attempt a jump from his upstairs bedroom window to a large tree far enough away from the house that made the jump impossible.  This is the same son who has the most precarious, capricious adventures to this day.

One year, we had torrential downpours and the swale next to our house filled to the top with water.  My oldest son had disappeared with his cousin.  I heard “Row, Row, Row Your Boat” echoing across the vale. But when I glanced out the window, I saw the two boys.  They had pulled the hard car top carrier out of the shed and were paddling around the “pond” singing at the top of their lungs.  This boy and his friends decided to take go fishing down in Daretown Lake in a boat during a storm, carrying umbrellas.  Surprisingly, they all survived.  With joy I report that they have become good leaders and examples.  (As an aside, this son passed away a short time ago with lymphoma.  He was such a joy and we all miss him, but he left us with many fun stories and memories to share.)

The youngest one had a special affection for animals.  Our dog died and my son was very sad.  The oldest brother dug a hole and put the dog in the hole, covering it over.  He put his arm around his little brother to comfort him, while I stood on the porch watching with tears streaming down my face.  A while later I looked out and saw a makeshift cross made from sticks with a bandana tied to it over the burial site .  I asked about the bandana, and my sensitive youngest son said, “That’s the way they do it in John Wayne movies.” He’s always been quiet and observant.  His dry humor and insights often help me through rough moments.

While Ihave  never rushed my married children into having babies, I am thankful that they have brought beautiful, interesting, and creative children into my life.  My husband is not here to enjoy them.  He would have loved them with all his heart; he would have gladly babysat them at a drop of a hat.  These children have little characteristics that remind me of their granddad and of their parents.  Thus, the perpetuation of a family goes on, and I learn more about that each time I am with the grandchildren, but I am also happy that when they clean up the mess, they go home to their own houses.