Do Not Let the Memory Fade - Elizabeth Franklin 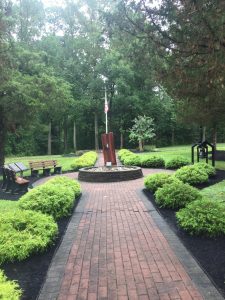 Each September, I anticipate increased traffic because school busses are back in action stopping at nearly every house on the block. I look forward to the changing of colors in the landscape, cooler weather, increasing expectation of the holiday season, and pumpkin-flavored everything. All of these bring a sense of excitement; however, a stark reality comes to remembrance as we approach September 11.

On September 11, 2001, I was teaching an English class when one of the principals came to my classroom door to ask if I had heard the news.  How can I hear the news? I asked.  I am teaching a class.  Then she told me that a plane had crashed into one of the Twin Towers.  My first thought was that a tragic accident had occurred.  Within minutes, she came back to tell me that another plane had hit the Towers.  Word spread quickly among the faculty, staff, and students. As the situation grew even more desperate, we crammed into one classroom to watch the news where we heard about the strike on the Pentagon Building, followed by the crash in Shanksville, PA.

I do not remember any panic among the students or teachers, just shock.  I do not remember if parents came to the school to pick up their children, but they must have done for fear of some unknown attack.   I remember my daughter calling from Dunbar, WI. She was hysterical.  My husband and I assured her that the safest place she could be was in Dunbar at college.  These terrorists were unlikely to attack a small midwestern college in the midst of the woods; yet real fear resonated among the students there as well.

My mind reeled with the massive toll of destruction and lives lost because of a group of religious zealots.  What evil was this?  In my lifetime, I never imagined such a possibility of the United States being attacked on such a horrific scale.  True, from history I know about the attack by the Japanese on Pearl Harbor, but that was history I thought.  How could something like this happen now?  Weren’t people of the world more realistic and more conscious of the efforts of peaceful negotiations and efforts to resolve problems diplomatically?

Suddenly, people everywhere were praying.  Church doors opened for all who wanted to spend time searching for peace in their hearts and answers for their questions.  Some were asking, “Where is God?” and “Why would a loving God allow this to happen?” while others were on their faces in churches and in their homes seeking comfort from God.

A sense of nationalism, patriotism, and unity burst forth like something I had not witnessed during most of my life.  The President stood beside the EMS personnel, trying to comfort and encourage them as they faced unbearable losses among their teams.  The President attempted to calm the nation and promised retribution.

Today, I attended a 911 memorial service in Mantua, NJ.  The Camden County Emerald Society, a bagpipe corps, played beautiful renditions of “God Bless America,” ” Amazing Grace,” and “Dawning of the Day.”  The Clearview Vocal Ensemble sang an inspiring rendition of “The Star Spangled Banner.”  Several made remarks; the families and EMS personnel rang bells in remembrance and laid wreaths, and a pastor from True North Church prayed for comfort and peace.  The service was poignant.

Here I am seventeen years later seeing a country deeply divided and filled with anxiety and hostility toward their fellow Americans.  To some degree, the terrorists succeeded in disrupting the peacefulness of our homeland.  Increased vigilance at airports, on the waters, and at train stations created an uneasy feeling among passengers.  The general population became more wary of immigrants.  The economy took massive hits, which was the intension of the terrorists.  And for years, the nation has become more unsettled and distrustful of its own citizens.

Today, Joe Scarborough made the claim that our current President is more dangerous than the terrorists of 911.   I do not think that is true. At a time when we mourn the massive loss of the lives of working people at the hands of a few religious zealots, we do not need talking heads to politicize this event.  We are grieving.  We want to come together for comfort.  We want to remember those who were killed in such a horrendous way and with no fault of their own. 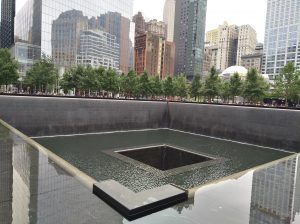 My hope is that we as a nation will once again be unified. We show ourselves to be great because of the things we do for our citizens when a disaster strikes, for the things we do for people around the world who are in need, for the offering of assistance to victims of abuse here and abroad, for our desire to bring out the best in our citizenry, to support our EMS and police officers, and a host of other accomplishments.

Do not forget what occurred on September 11, 2001.  Do not let the political environment block out the grief of that day.  Remember the people we are and what we can do as Americans when we stand together.