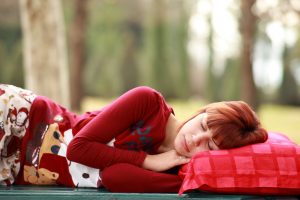 I am not a nap taker. I never have been a nap taker–until recently.  However, my mom is the best naptaker. She takes many naps throughout the day. In fact, she takes a nap before she goes to bed at night. This woman is very serious about naps.

Why do I have an aversion to naps? I believe my anti-naptaking stance is due to the number of naps my mother takes. I remember when we were kids,  Mom had a phone number that she dialed to create a busy signal.  If anyone called her during her nap, that person heard a busy signal.  If one of her children were bleeding out on the playground, the school nurse  would have heard the busy signal when she called my mom.

Mom would prepare for her naps by taking us to the library. We picked out books by the armsful, preparing to find a quiet place to read. Upon arriving home, we went to our rooms or out in the backyard to read book after book.  My mother’s bliss came upon our arrival at home. She knew that she had plenty of time to nap because we had enough books to keep us enthralled for hours.

Being raised in a Baptist home meant limited activity on Sunday for it is the Lord’s Day. We did not participate in activities that were a part of the other days of the week. Thus, we took Baptist naps. Those Baptist naps were a serious thing in  our house.  Although  did not associate the Baptist nap with the daily nap, I still did not nap. I read.

When I married my dear husband, he liked the idea of the Sunday nap. He liked the idea of snuggling down in the blankets and hugging me while he slowly drifted into the Baptist nap. I would pick up my head to ask a question, and he would push it back on to the pillow saying, “Just go to sleep.” I couldn’t do it. I continued to fight the nap.

However, here I am several years later. I wake up tired and go to sleep tired. I think I need a nap. As I try to read,  my eyes close and I drift off. I try to fight the nap, but it sneaks up on me and soon a fog covers my brain to the point that I cannnot comprehend what I am reading. Hence, I succumb to the creeping need to NAP.

Sadly, I have no one to snuggle with except my dog, who is not a snuggler.  Age has become my companion and  speaks the words that I do not want to hear:  Just go to sleep. And so I nap.