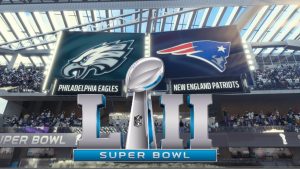 The East Coast was at fever pitch with anticipation of the match-up between the NE Patriots and the Philadephia Eagles in the biggest game of the year.  The Patriots are a remarkable team with a remarkable quarterback and a strong coach, except for the times that they cheat.  The Eagles’ history is not so remarkable.  They often have decent teams, but they never seem to be able to get past a certain point successfully in the season.

However, this year’s Eagles team did something prodigious.  They demonstrated a true Can-do, Will-do spirit.  In spite of naysayers and doubters, like me, they overcame the odds of going up against Goliath and like young David, kept their secret play, The Philly Special, in the bag until the last minute.  And down came Goliath.  Tom Brady and Coach Belichick went back to the locker room, hanging their heads–and probably kicking the dirt with their cleats.  Now, the Eagles can finally say that they are Champions.

The truth being told,  I am not an avid football fan, although I enjoyed watching games with my husband, who loved to watch the Eagles play. When he was here, he loved to have the guys over to the house to watch the games.  If he had scheduled a meeting with the deacons at church, he made a point of cutting the meeting short so everyone could make it home in time for the kickoff.  Needless to say, watching football without him here leaves a lot to be desired.

I did not watch the Superbowl game, but around 10 pm, the local news came on, and I caught the breaking news about the Eagles’ win.  As I watched, I saw a few people in Philadelphia running down the street.  Within minutes the streets of Philadelphia flowed with rivers of people, jamming into each other, jumping up and down, hanging from greased lightpoles–which is very strange. I watched, fascinated. Reporters were among the citizens trying to get the feverish spirit across the television to those of us at home.  The crowds screamed in the reporters’ microphones, some expressing utter joy and others just taking the opportunity to use a little foul language.  I loved one reporter who reminded the crowd around her to watch their language.

The frenzied pitch of excitement came across my television into my quiet little living room where I watched, fascinated at the sheer numbers of people cramming the streets.  Their excitement was palpable.  They were singing over and over “Fly, Eagles, Fly.”

By 11 pm. I had had enough and was ready for bed.  As I lay my head on My Pillow–yes, I have one of those–my brain reverberated with “Fly, Eagles, Fly.”  I lay there awhile waiting for sleep to come, but  no, I kept seeing the vision of extreme enthusiasm and joy in the streets.  I flipped over.  “Fly, Eagles, Fly” still echoed in my brain.  I thought to myself, “This is ridiculous.  I didn’t even watch the game.”

At some point, I fell asleep, and hours later awakened to the morning.  What was that noise?  Who was singing?  I stopped and listened.  It was those nuts in the streets of Philadelphia still housed in my brain singing “Fly, Eagles, Fly.”

I thought about the elation of this long-sought-for win.  Amid the excited pandemonium of the previous evening, players and coaches made statements, many giving glory to God, thanking their loved ones, and uplifting their teammates. The lack of self-aggrandizement so typical of these events impressed me.  I am proud that this team exhibited a humble collaboration that made a successful outcome to the game.  They demonstrated that seeking the highest good in team members brings out the best for everyone involved in the effort.

I found it interesting that faith exhibited among this team became a topic of discussion among talking heads on television and radio.   Dom Giordano made a comment on his talk show that I think sums the Eagles’ team attitude well.  The team demonstrated their faith, by playing hard and playing well.  Their care of each other and efforts to see everyone succeed brought acknowledgement of their truth faith in God.  They were living out their faith for us to see.  That’s real faith–outward behavior that reflects the inward heart.

I’m proud of you, Eagles, not just for winning the Superbowl, but for showing us what faith can do.