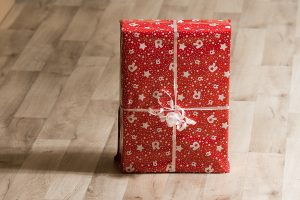 Christmas time is such a wonderful time of year. We muse on the joy of the season as we listen to the jingling songs, gaze at the sparkling lights and shining decorations, smell the aroma of baking cookies, taste the flavors of seasonal vegetables and meats, and feel the heat from Yule logs roaring in a fire, even if it is one on a television screen.

Christmas time is a time for traditions. Every family has its own set of special holiday customs, tried and true that defines its history.  Our family has its own Christmas ritual–the highly anticipated and equally highly dreaded white elephant gift exchange. Each adult family member searches during the year to acquire a unique item that is so hideous or hilarious as to ensure gales of laughter or sighs of relief from those lucky enough to escape receiving it.

The item may be purchased or found.  It may come from a flea market, a swap meet, a yard sale, Grampa’s stash of old clothing, Mema’s jewelry box, or it may simply be an item that has been sitting on a shelf in the basement for years.

One example of the perfect gift is a set of old green folding chairs that belonged to my grandfather, which he purchased in the late 1950s. They are old, uncomfortable, and slightly rusty with green padding.  Somehow, throwing them out seems almost sacriligious because they belonged to Grampa. I inherited them after my grandfather died, but after several years of using them, I decided to pass them along via the White Elephant. I wrapped them in lovely paper and delivered them to the site of the exhange. My sister’s horrified stare upon unwrapping them delighted me.  Over the years, those chairs appeared and re-appeared in various, mischievous and clever disguises. Today, while those chairs await another appearance, they lie in state in my sister’s basement.

Perhaps the most memorable White Elephant re-gift is an eight-inch Santa, who makes an appearance annually in various bags and boxes, hidden in cookie tins, packed in cherry cordial boxes, nestled deep in giant gift bags, and other inventive packaging. Once inside a small black velvet box, chosen by one suspicious member of the family who believes that she is safe by picking the smallest box, was a note proclaiming, ” You are the proud owner of Ugly Santa.” Ugly Santa has never missed a family Christmas since he made his debut ten years ago.

The best part of this tradition is the family memories that surround this hilarious exchange.  Early on, my sister, who first introduced Santa to the exhange, noticed that my eldest son in particular, thought the gift of unsightly and unattractive.  Since he was obviously horrified by it, she determined that henceforth whether by luck of the draw or nefarious actions following the exchange, Ugly Santa would end up at Drew’s house for the remainder of the year.  She explained to Drew that Santa preferred “summering” in New Jersey.  Thus began a spirited contest between the family members,, colluding together to make sure Ugly Santa ended up in Drew’s possession every year.  A strict respecter of rules and practices, Drew became increasingly unamused by his discovery of Ugly Santa tied to the hitch on the back of his truck, sneaked into his glovebox, and packed into his duffle bag.  Even his children were not off limits.  One year one of the aunts whispered to Drew’s three year-old son that she had a special present for him that he could open when he arrived home.  She handed him a small gift bag and hustled him into the waiting vehicle.

The family pranksters even went so far as to sneak over to a hotel where my son and his family were staying to stash Ugly Santa in the truck bed, to be found after Drew discovered a hastily written poem about Santa slipped under the wiper blades.

That was the last straw for Drew, who insisted that he was not taking Santa home in 2016, and somehow, it ended up “summering” in Stafford, Virginia last year.

This year, Drew is not with us. He passed away in October, but the memories we created over the last few years related to Drew and Ugly Santa brought gales of laughter and streams of tears as we once again staged the White Elephant Christmas tradition. The aunt who infamously forced Santa on Drew all those years somehow ended up with ugly Santa this year.  Was this a funny happenstance or was the family secretly scheming to stick it to her on Drew’s behalf?  Who knows? Either way, I like to think Drew would have gotten a good laugh in seeing her laugh and cry upon opening the “treasure” this time, hidden deep within a pair of ladies high-heeled boots.

Christmas time is a wonderful time for memories. Make them. Remember them. Rehash them. Hold them close.

Special thanks to my sister for reminding me of the details of these events and helping me get the story right.