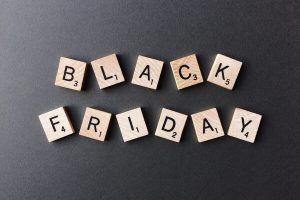 Our children have grown up with the idea that Black Friday is the official beginning of the Christmas season. Always looking to gain a new tidbit of information, I learned that one of the first references to Black Friday had nothing to do with bargains or big box stores.  In the early 1600s, Black Friday referred to exam day in school.  Being a former teacher, I  found that fascinating.  But things have evolved to the point that Black Friday is synonymous with businesses ending the year in the black rather than in the red.

Each year as Thanksgiving approaches, my sisters start planning their post-dinner shopping spree which usually lasts into the wee hours of the morning on Black Friday.  In past years, while I am sleeping snugly in my bed, I hear my phone pinging with text messages.  Occasionaly I wake up to see who is texting me at this hour of the night, and yes, there they are sending me pictures of themselves in different locations with their packages, their hands grasping Dunkin Donuts cups. It’s their way of letting me know that they wish I were with them.  I much prefer the sanctity of my bed.  No bargain is so great that I need to shop that late into the night. However, this year my sisters dragged me into the fray.

As the food began to digest, one of the sisters suggested we head out for the midnight shopping jaunt. I leaned back in the chair and closed my eyes.  I am not a night person,  but my attempts to send a message that I wasn’t feeling too excited about that opportunity went unheeded.  I hoped that they would overlook me in their efforts to get out the door, but they just do not accept NO as an answer. I grudgingly agreed.

We all crammed into one vehicle and  headed out to the bargain spots.  No one really wanted to head to Ollie’s or Big Lots.  Instead, we trudged to Kohls, which had lines on both ends of the stores. People were buying clothes, televisions, and crock pots. I was buying a pair of Fila pants and a shirt for myself. As I waited in line, my sense of smell was accosted by a man in front of me who had not met a stick of Old Spice in recent hours.  During the twenty minutes that I waited in line and between gasps of breath which I was holding as long as I could, I received multiple texts about locations of my sisters and nieces who were all in different locations in the plaza. It”s a good thing that we all have cell phones.

I had no idea what I would buy in Old Navy where everything was on sale, but once again I bought myself some clothes.  We cruised down to Bath and Body Works.  I again purchased items mostly for me. This was turning out to be a very selfish shopping trip.

The 1:00 AM trip to Walmart was a once in a lifetime trip for me. Televisions seemed to be the object of possession that night. Huge flatscreens were stacked up in the walkways and garden center there. I saw one guy leaving the store with two 50 inch tv’s. Now what could he be doing with those?  At one point, my niece was so tired and complaining, so she decided to climb on top of the boxes of televisions to take a brief rest.

Finally,we climbed into the car and headed home around 2:00 AM. I began to grow more tired, but with the help of my sisters, nieces, and Dunkin Donuts, I survived the evening of special bargains set up to lure buyers into the market place.While I do not enjoy midnight shopping, something good occurs when I spend time with my sisters. We talk about the past, rehash current themes in our lives, make observations about the state of the country, about the state of our personal equipment feeling sore, falling apart, or falling down.  We observe which of us has had major changes and how we are coping with them. We rejoice that our parents are still well and active, that our kids seem somewhat productive, that we live in relative safety, that we have the freedom to practice our faith and worship as we please.

I do think that Black Friday with all of  its so-called bargains interferes with the spirit of Thanksgiving.  While I don’t advocate for the Thanksgiving evening shop-o-rama,  I do encourage the togetherness that Thanksgiving brings for me and my sisters.