Age is a Creeper - Elizabeth Franklin 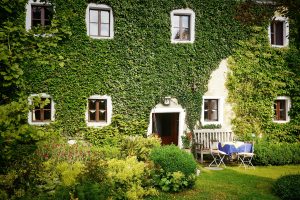 When my recent birthday rolled around, and I found myself knocking on the door of sixty years old. When did that happen? Age is a creeper. It sneaks up slowly and then attacks. It’s like the English Ivy on the side of a house. It starts out slowly; its tendrils stealthily reaching up and attaching to the siding of the house, then taking over as it grows exponentially, becoming a tangled and insidious mess that is hard to cut down and eliminate. Age is always there, advancing slowly and steadily, creeping into the joints and muscles, putting limitations on the body. The pace slows as the world around moves faster.  The mind begins to wander more often and sometimes fails.  And suddenly, unexpectedly, one is old.

In my youth and young adult phase, I recall many lovely older people telling me that as one grows older, time moves faster. At that time I did not think that was possible. I was raising kids whom I was sure would never reach kindergarten age because they were toddlers for what seemed like eternity. I enjoyed good health and athletics, church activities and college classes. I filled my days with a lot of activities and an almost endless supply of vigor.

When I turned thirty, I realized that this was a great age Although turning the corner into a new decade was a bit shocking, I realized that I had entered an era in which I was no longer an idealistic, simple-minded know-it-all. I had reached the age of respectablility. I was a real adult then. I still had energy to spare and availability to do things with the kids and their friends. However, during my thirties I began to feel different physically.  A pain here and there, an injury required a longer healing process, and then there was the occasional mental lapse. I blame that on the kids who had me going here and there and everywhere.  My youngest son often bemoans my occasional forgetfulness related to picking him up from township soccer practices when he was eight years old.

Suddenly, forty crept up behind me. What an advantage, I thought. A feeling of freedom seemed to burgeon at that time. I loved this time when my children were teens, at least most of them were, and I could interact with them and enjoy real conversations. I enjoyed adult activities with other couples who were friends, going out to dinner or serving together at church functions. I enjoyed having some alone time with my husband.  As I reflect on this decade, I believe it was probably one of the best, but it was over in a flash.

Fifty was a little bit of a shock. I began to notice that the sage words of my older friends was right.  Time moves faster the older one becomes.  By this time, most of my kids had finished college or were in college. Several of my kids had married and had a few children of their own. Mark, my husband and I, began discussing new opportunites the we would have in the not too distant future. We discussed downsizing our home, traveling to visit missionaries abroad, being involved with the grandchildren, writing books, and other dreamlike sequences.  But unexpectedly, my husband and I received the dreaded news that he had cancer. All the plans went out the window.  Illness and how to cope with it became a frequent topic of conversation.  Time hasted on.

So here I am at fifty-nine. The aches and pains have become more apparent. The tendrils of arthritis have stealthily wound themselves into the joints of my neck and thumbs.  I’m slower than I was a year ago. Bending over to pick something up from the floor is an all-day event. My energy has waned.  Each morning I rise with the hope of achieving great things, but by the time I’ve made my coffee, I’m ready for a nap. My brain still thinks that I’m eighteen years old. My brain tells my body that I am eighteen, but after my body has attempted some massive feat like getting the trash cans to the curb on trash day, it begins to whine and protest about the amount of work it had to endure. (That’s not so unlike a teenager, I think.) I have noticed that the conversations that I have with my friends involve details into realms of doctors’ visits, aches and pains, and general complaints. Yes, I am finding the truth in the saying that “the spirit is willing, but the flesh is weak.”

Now, as in childhood, I have regular visits to the doctor’s office for check-ups.  During a recent visit to my physician for an ailment, he told me that I’m “growing up.” Smirking, he said that this is the way of old age. I glanced quickly around the examination room to see if he was referring to someone other than me. He’s such a wise guy.

As I contemplate this new era in what may be the autumn of my life, I still see massive opportunities for myself. I still want to travel to places in the United States and perhaps a few places in the world. I want to write another book or two. I am considering pursuing another degree in English. I want to be a friend to young adults who need a little encouragement and a reality check. I want to be involved in my church. I may want to take on another teaching job.  I want to exercise more, eat in a more healthy way, be more vocal about my faith and my conservative political views. I want to try new things.

As age has crept up on me,  I am aware that I am slower, but I am also aware that I am wiser.  Like the English ivy, age has flourished and taken over much of my existence.  While my brain still thinks that I’m eighteen, I’m thankful that I am not. The advantages of age far outweigh the foibles of youth. Yes, time does go faster, but I seem to have a little more time to watch the grass grow, listen to the birds, sing, chat with friends, and study the Bible.  These are a few advantages to the creeping of age.

1 thought on “Age is a Creeper”