Working out the kinks - Elizabeth Franklin 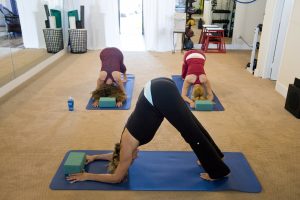 Last year, I joined the local gym hoping to gain some flexibility in my increasingly tighter joints and muscles and perhaps lose some weight in my ever widening surface areas.  I am pleased to say that I have gone to the gym faithfully three to four times a week, even taking on a trainer.  My cholesterol and sugar, both hovering on the edges of normal and abnormal, have gone down significantly.  However, this year has also brought increased aggravation in my joints and muscles due to the constant use of weights in my routines.

I decided that in order to alleviate some of the pain, I would take a yoga class one day a week.  Although I am not a proponent of Eastern religion or Eastern meditation,  I planned to follow the routines hoping to reap the benefits of flexibility, better balance, and a pain free existence.

One of the biggest concerns was what does one wear to a yoga class?  Most of the people that I have seen have fancy leggings with matching tanks and sneakers, but I can tell you that I am not ready to be in the front row of the class,squeezed into Star Wars leggings,  looking like a Beluga in spandex.  Upon my arrival, I took a quick glance around the room at the other yogis, assessing my competition.  I saw people of all ages and sizes.  I saw that many people wear shorts, sweatpants, and tee shirts, which was a relief to me. Clearly this is not a passionate group.

The first class introduced me to something called the yoga dance. Being a good Baptist, I have no rhythm, but I swayed back and forth waving my arms resembling those giant air cylinders outside the car dealerships flipping crisply in the wind.  Keeping one eye open in order to see what Loretta, the instructor, was doing and partly to make sure I didn’t lose my balance, I mimicked her graceful movements though with less elegance.

After three or four minutes of swaying, Loretta instructed us to take the crosslegged position on the mat. After a minute or two of trying to arrange my legs in that position, I took a few deep breath, reaching up to expand my lungs, but by the time I had that position, Loretta instructed the class to straighten our legs and lean forward, reaching to touch our toes. I tried to bend forward, but I’m limited.   I reached with effort when I sensed a quiet but steady screaming sound.  Listening carefully, I realized that the sound was my hamstrings begging for mercy.

Loretta said, “Side plank.”  I watched the others in the class put one foot on top of the other and leaning on elbows, lift their bodies off the floor. Now how does one do that?  With great effort, I found a short cut to the side plank.  I put one foot flat on the floor and lifted the lower quadrant off the floor.  “Gaze up at your thumb,” said Loretta.  I’m just trying to maintain my balance without toppling over and crashing to the hardwood floor, so gazing any where but straight ahead was my only option.

In the meantime, I heard and thumping and grunting noise.  I glanced over my shoulder to see an Asian woman doing some kind of worm dance motion on her mat.  Her legs came off the floor and over her head and then as she came down to the floor, she made a thumping noise. I found myself being distracted from the quiet relaxation that I was supposed to be experiencing because she was doing something other than what the class was doing.   Clearly, she knew something that none of the rest of us knew.

Moving on to the next yoga position, I attempted to do the Cobra.  That is one painful move.  I felt my vertebra crushing together as I leaned upwards with my head back.  How is that helping?  It may be good for the abs, but I thought that my back was going to be crushed.  I expect to need to see the chiropractor at some point after these sessions.

Next is the stretching part of the class where I go into the Downward Facing Dog, which I can do until Loretta says, “Now, with both feet, jump forward so that you feet are between your hands.”   Jump with both feet?  Forward?  You have got to be kidding.  First I have to stand up straight and walk to the top of the mat and then move into the forward bend. From there,Loretta instructs us to take the Running Pose.

My favorite part of every class is the Resting Pose, which involves lying on one’s back, palms upward, feet falling outward.  I am totally down with that one.  I can stay in the Resting Pose for a long time.  Loretta says that we should feel the healing white light.  I see no light, but I do see a reflection of the clock in the mirror which tells me the end is near.

While I have my doubts about any success on my part in the yoga class, I see a little old chubby lady in the lotus position with her head touching the floor in front of her knees. She is inspiring as are others who come to the class in spite of size or age.

I’m not sure I am experiencing any extraordinary benefits from the class, because I usually leave in pain, but I still go in hopes that at some point, I will reap the benefits of strengthing my core and increasing flexibility and balance.  I just hope I don’t burst out laughing during one squat poses where I may pitch forward and crack my skull on the floor.