What to do with Millennials. - Elizabeth Franklin 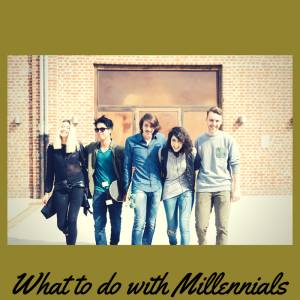 Millennials are perplexing. Many of us struggle to understand their apparent lack of work ethic, the constant attachment to social media, the lack of motivation, etc. Recently, I read an article by Noreena Hertz in which she discusses some of the perplexities of understanding youth today, commonly referred to as Millennials.

It’s easy to perceive today’s young people as lazy, detached from those around them because of their umbilical-like attachment to smartphones and avenues of virtual reality. We complain that today’s young people are narcissistic, slothful, over-indulged, ungrateful, and disrespectful, but is this true?

According to Hertz, these artificially engaged young people believe the world to be a difficult place, a place of inequality, partiality, and barrenness. One young man said that he believed his life was far more difficult than that of his parents. Young people are worried about school, making the grade, and debts that will pile up for which they will be responsible. Hertz reminds the reader that millennials have only known a world at war and filled with terror, and though most young Americans have experienced neither, they perceive that the future is indeed bleak. The millennials do not trust establishment and time-honored traditions; they believe business and government are exploitive and untrustworthy, says Hertz. This explains the success of The Hunger Games series and The Maze Runner, as my millennial lawyer friend Marques Goetsch and I were discussing recently. The world of Katniss is the world that today’s young people see. They see themselves as fighting for survival and becoming champions of those who are weak, poor, and downtrodden by the establishment.

I wonder if some of these views are precipitated by the insular attachment to social media. The perspective that young adults receive is very narrow and often exaggerated and incorrect. The whole truth is not found on the internet, Tumblr, SnapChat, BuzzFeed, The Huffington Post, or other such media outlets.  Truth continues to be relative, and because they do not interact with older adults as much as the grandparents did back in their youth, today’s young adults have a skewed view of the world.

Why is it that young people do not consult their elders?  Perhaps young people are too busy with their activities, sports, jobs, friends, and other distractions to take the time to ask Grampa a question about politics or the economy.  Maybe parents do not set aside dinner hour as an electronic free hour to sit around the table, eat and chat about the day’s events not only in the lives of their young people and themselves, but also the events of the world.  That’s a blog for another day.

Hertz also makes this assertion: Because the world is replete with despair, they have become a “generation of makers, creators, inventors, and they increasingly value things they can actively co-create.” Hertz makes this interesting observation: The young people are “producing something themselves that has value for this generation…They have a desire to be self-sufficient.”
This intrigues me. Isn’t this idea essentially the American model? Is this really unique thought? Innovation and invention have been part of the American fabric since the first settlers came to the shores of America. Being individual, yet needing to work with others to survive and make the world a better place by creating, inventing, and innovating has been part of American culture since its origins.

The reality is this: Young people have always fought against the status quo and against the unfairness of the world. But, over time real life experiences like holding down jobs, paying taxes, building relationships, and coping with unanticipated hardships cause them modify their views. If they are lucky enough to interact with people who have endured real hardship like war and famine, disease and death, they realize that they can be part of the solution by using the information that they have learned.

Yes, millennials are perplexing. They are idealistic and dream of an egalitarian world where peace and love will reign supreme. There is hope for them and us. The older among us have lost much of the idealism we had when we were their age because we have discovered through trial and tribulation that life is not a walk in the park, a bowl of cherries, or sunshine and roses. However, these experiences do not embitter us to life. We still have opportunities to embrace the joys of life in spite of the pain. We can take opportunities to interact with millennials and share our life experiences with them; this will be more helpful than what social media has to offer or what academia has infused into the minds of these young adults. We need to make an effort to understand one another better and be more productive in our society.