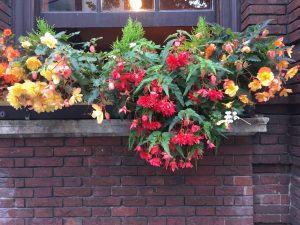 As I reflect on the wonderful opportunity to take a trip to England, I am thankful for safety, first of all.  I am also thankful that I had the occasion to meet new people.  Even after thirty years of greeting people at the church door as they left after the sermon, I am never fully comfortable meeting people that I do not know.  This 1500 mile bus trip around Great Britain gave me ample time to settle into different seats each day and chat with other travelers.  Fortunately, the group was very small, so not only did I have plenty of space on the bus, I also found time to talk to these friendly individuals.

As we spent long hours in airports and on the bus, we chatted about our families, our faith, our politics, our hobbies and interests.  Most of us were older, although one young couple and two young adult women traveled with us, which made the group a little more diverse.  The majority of us came from the Philadelphia area, but some came from Virginia, the Hoboken area in New Jersey, and the others from Newfoundland.  The time spent with each was fascinating and unique.

Several highlights from this trip were the Tower of London, All Hallows Church, York Minster, King’s Chapel at Cambridge, and Holy Trinity Church in Stratford Upon Avon.  You need to know that medieval times fascinate me, so I wanted to see all that I could that related to that time period. Traveling through the ancient streets of Cambridge and York captured my imagination and wonder.

The streets in both towns are narrow and cobbled, many allowing only one car to pass. Occasionally, the streets are so narrow that only foot-traffic may pass. How those tour busses maneuver through the streets is amazing to me.  In some places too narrow, we emptied the bus and walked.  In Cambridge, I visited the King’s Chapel at the Cambridge University. This ancient structure from the days of Henry VI 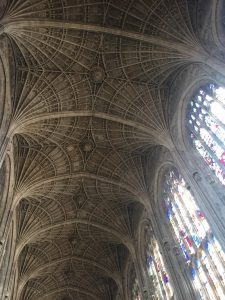 and completed by Henry VIII has many interesting carvings and symbols on the walls. The ceiling houses the largest fan vault in the world.  The chapel has enormous stained glass windows depicting Bible stories from the Old and New Testaments.  As I stood in the middle of the chapel looking up, I wondered about the architecture. How did they do that?

York was another fascinating medieval area.  Of course, York Castle is in the middle of the town, but even more impressive is Yorkminster, which is the cathedral.  The guide explained to us that as time goes by, the weather wears on the stone, so stone masons replace the stones a few at a time.  They do not use modern tools to shape the stone, only the basic masonry tools.  The cathedral houses the largest medieval stained glass window in the 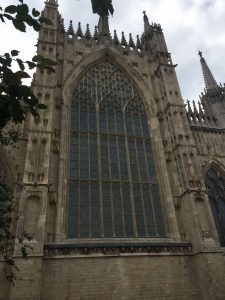 world.  Here, the guide explained that this ancient window has needed protection and the cost is astronomical, as you can imagine.  Special glass reinforces the interior and exterior sides of the window.

This church is the location of the second highest religious leader in England, the  Archbishop of York.  The church itself is high Anglican. A group of us decided to attend Evensong there in Yorkmister.  That was an interesting experience.  The service is very ritualistic with chanting, kneeling, standing, bowing, and singing. Listening to the voices echoing off the vaulted ceilings and hearing the Scriptures read gave a sense of solemnity that is missing in churches today.

The architecture alone is a marvel to me.  As I see buildings constructed today with scaffolds, cranes, and large earthmoving equipment, I am awestruck by the ability of craftsmen to do accomplish so much more artistry without the benefit of modern conveyances and tools.  As I gazed at the vaulted ceilings, the intricate carvings in wood and stone, the colors in the enormous stained glass windows, I marveled that some of these buildings have stood since the 1100s.  They have withstood the test of time and experienced fires, hurricanes, and the bombs of WWII. To stand in those building and think of the Romans, Anglo-Saxons, and Normans settling these areas of Great Britain and building some of the first churches, cathedrals, and castles increased my interest and amazement.  I hope to return sometime soon to investigate further areas of Great Britain.