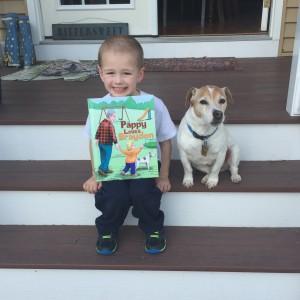 As many of you know, my husband Mark had a rare form of cancer that ultimately took his life. While he knew he was seriously ill, he never lost sight of the fact that there was the future, and in his optimism, he planned to have a long life with his children and grandchildren and continue serving as a pastor. He looked forward with great anticipation and joy to the day that he would be able to play with his grandchildren and be an integral part of their lives. Mark was thrilled when he heard that he was going to be a grandfather for the first time. Braydon came along in August 2010, two years after my husband heard his diagnosis, but Braydon lived at least three hours away from us. Mark wanted to babysit and visit, but the distance was a challenge. He was ready to drop everything to take a ride to Shippensburg, PA to watch the baby for a few hours.

Several years later, as my husband’s cancer progress, Braydon’s parents moved back to New Jersey, in fact, lived with us temporarily, but Braydon was going to have a brother. Mark was very excited about that. Blake came along a while before his parents moved a short distance down the road from where we lived; this was a blessing because Mark would hold little Blake while Melissa made dinner or had errands to run. His relationship with the two boys was very special for him.

Blake was just about one year old when Mark died, so he does not remember Pappy. One month after Pappy died, his third grandson came along. Owen is a striking resemblance to the Pappy he never knew. Last year, a little granddaughter was born, Reese, who would have been the apple of her Pappy’s eye. 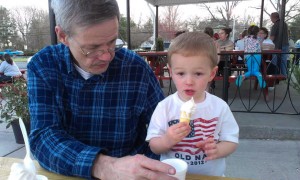 While trying to deal with changes in my life, I began working on my MA in literature and took a class in which I had to write a children’s picture book. For some reason, Pappy Loves Braydon popped into my head, and I began this journey of writing about the real life occurrence of a grandfather and grandson.

This journey is not unique. So many children have lost a grandparent to cancer or another disease. How to explain what happens or where Pappy or Nana have gone is sometimes difficult, so in this book, I tried to tackle a sensitive subject, based on my observations. The sentiments of the story are universal, whether it is a parent or grandparent that has passed away.

I believe this book can be a teaching tool as well to discuss real life topics with small children. I hope it is an encouragement to you.