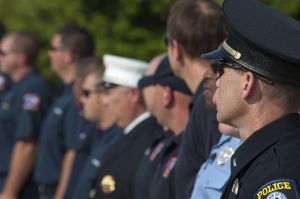 When I heard about the shooting in Dallas where a supposed lone killer shot five officers in cold blood while they were on duty during a protest, I felt my heart sink to my shoes. This occurred in the same week that two other shootings involving police officers made headlines and raised the hackles of communities in protest. Again, we face a crisis between large groups of disenfranchised people and law enforcement. People are angry. Our leadership is divisive. Cries for justice are echoing constantly via the avenue of activist groups and news media outlets. The whole country is in a state of chaos.
My grandfather was a police officer in Flushing, NY. Back in the day, my grandfather walked a beat with his Dutch partner; he often told me that he never pulled his gun in all the years that he walked the beat, but he did carry a nightstick and used it when necessary. Here in the countryside where my nephews are cops, cops don’t walk that many beats, but they do handle many dangerous situations involving car accidents, drug arrests, traffic problems, domestic situations, crime, and a host of other situations that can be extremely dangerous to them. To date, none have been injured on the job, God be praised.
I have respect for the officers, no matter what ethnicity or race they are. They protect us from harm, guide us safely through dangerous areas, come to our aid when we have injuries, correct us when we are driving like maniacs, even answering stupid calls when we think an intruder is in our back yard and it turns out to be a raccoon.
As I was watching a news report this week, two young black men were eating in their car parked along the side of the road. Suddenly, they were surrounded by several white officers with guns drawn, shouting at them and ordering them out of the car. To the credit of these two young men, they obeyed the officers without being cocky or without resisting. One of the young men said to the reporter on the scene, “No offense, by when I saw the Caucasian officers with their guns drawn, I was scared.” Yeah, I guess so in light of the recent incidents that have occurred. But I have news for you. I would be scared too if any officers pointed guns at me, no matter what race or creed they were. I know that I was a little more than nervous when a big black detective pulled me over on the highway and was ranting at me about a little driving faux pas that I committed, so I can imagine that fear multiplied many times as experienced by young black youths approached by white officers.
I applaud a number of the young black men that I have read about this week, who believed that for their own safety and best interest, they should be respectful of the authority in uniform. I am not naïve about the struggles within communities regarding law enforcement. For sure, there are dirty cops, but they not are the majority. I think that some cops are racist, but most are not. Most put on their uniforms with pride and with the desire to serve the public.
I believe it serves all us best to recognize that these community soldiers risk their lives for the population in general. Is there really enough compensation for that? We need to pray for the officers in uniform, give them our respect, and by all means, obey the law so that their lives and ours can be much easier.