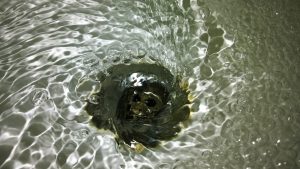 Recently I have become enchanted with Mike Rowe, formerly of the show Dirty Jobs. You can catch him at MikeRowe.com/podcast. Occasionally, I see a glimpse of his videos on Facebook, but I know the he has vidoes on YouTube as well. He has a marvelously sonorous voice, which engages the listenr. While he talks about the value of hard physical labor, he encourages people to gain basic skills using their hands. Don’t invest tons of money into a college education, graduate with thousands of dollars in debt, and in the long run, not get a job in your field, Mike says. He encourages finding a trade that can sustain you in the real world.

On that note, I want to say, try to find a plumber. I had a dirty job that needed a specialist, cleaning out the bathtub drain. I just shudder with revulsion at the prospect of what is down that drain preventing a fast and even flow of receding water out into the field system in the back yard.

Imagine taking a shower and as you shampoo your hair and soap your filthy body, the water is rising in the tub to lower calf level. You hop out of the shower, get dressed, and still the water is slowly dripping down the drain, leaving behind it the most disgusting gray film, coating the tub.

How many showers can you take like that? Someone needs to take care of that dirty job. Who will it be? Well, where can I get a plumber? I asked my beloved landlord about the clog. He is such a dear. He came over and looked at the tub, and then went to the basement to assess the problem. He showed me where he would need to unleash the enemy of years of long hair tangled around some mechanism in the trap. It was going to be a dirty job. He needed a giant pan of some kind so that when he released the trap, all of the yuck could fall into it. As he was describing how he would do this nasty deed, I could feel the saliva in the back of my jaw beginning to effervesce.  This is a sure sign that something is upcoming.   I could see that even he had some reservations about how to handle this challenge.

My landlord is a genius. He went to the plumbing store and got some stuff called Thrift. It’s some kind of material that you put down the drain, and supposedly, the drain clears in minutes.  The bottle gives clear directions and states that it does not tarnish chrome or plastic.  Good to know since most plumbing is chrome and plastic.

George, my landlord, brought Thrift to the house and gave specific instructions about its use.  I followed the directions, and Thrift worked like a charm. Within minutes the shower water was flowing down the drain like a running stream. Imagine the time, mess, and money that my dear landlord saved himself and me.

b, but somebody has to do it. Now, I know that I can do it. By the way, I see that Amazon sells Thrift. Give it a try and save yourself a hassle when doing that dirty job.